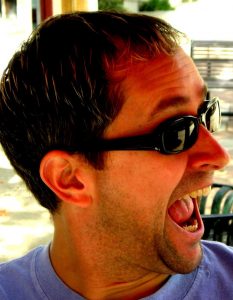 Do you know people who are so abnormally happy all the time you wonder about their mental stability? Everything is wonderful and constantly getting better for them. I read once that a positive attitude may not solve all your problems, but it will annoy enough people to make it worth the effort. That’s probably why always positive people make me want to put my fingers in my ears and hum loudly. It’s tempting to tell them to please calm down and be quiet. OK, I really want to say shut up. But I’ve decided if I could be the one to just calm down and be quiet I might learn something.

Keith is a longtime friend who’s known for the phrase, “It’s all good!” I thought the further he traveled into grown-up years his attitude would change, but it’s still all good. He’s just one of those enthusiastic, excited-about-life guys who is gifted with an extra dose of energy. When he was younger he decided if he said it was all good, it was all good. He’s tramped through some major challenges through his life, but his attitude stays the same.

Several years ago with saved hotel points and frequent flyer miles we took the kids to an upscale ski resort for spring break. All five of us stayed in one room with so much ski paraphernalia it looked like a sporting goods store clearance department. Most of it was always wet and strung across the furniture. It seemed all I did was look for dry clothes, hand out snacks, and hold stuff for everyone. And every muscle in my body ached from trying to keep up with the kids on the slopes.

The second night I thought about running away or at least disappearing to one of the local bars for tequila shots. I’ve never done either of those before, but it seems to solve things in the movies. Instead I ate two chocolate bars and went to bed to pray and regroup hoping the rest of the needy people in the room would forget I was there … at least for a few minutes. After a while, when it was finally quiet and everyone was asleep, I realized it really was all good.

So here’s what I’ve learned from watching the always happy people. It’s as easy to set yourself up to have an exciting day as it is to talk yourself in to a bad mood. Whining doesn’t change anything. And, if you stay positive you have the power to make people want to put their fingers in their ears and hum loudly.