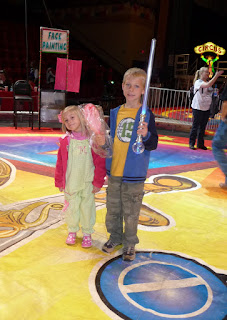 Have you ever thought something sounded like a good idea, but then it played out differently than you imagined? I found myself right there recently. While flipping through the Sunday paper I saw a coupon for the Shrine Circus; one free kid’s ticket with one full paid adult ticket. I could take two of the grandkids for the price of one. I’m a sucker for coupons and I hadn’t been to the circus in over 20 years, so I carefully tore along the dotted lines.

The following Friday, Jackson, Mollie Jane and I were off to the 4:30 matinee at the Shrine Mosque, Abeem-Aboom-Something-or-Other. I’ve decided the Shriners make up names to challenge us civilians. The circus raises thousands of dollars for the Shriners’ Hospitals to help kids secure needed medical help they might not otherwise be able to have. Once outside Mazzio’s Pizza, ten-year-old Travis was walking funny because he had spilled Coke in his lap during lunch when he was goofing around with his friend Ross. A man approached Jim Brawner and said, “I’m a Shriner. I can help your son. Here’s my card if you want to give me a call later.”

Jim smiled, thanked him and bit his lip to keep from saying, “You want to give it a try?”

The fellas in the maroon tasseled hats guided us in the ticket buying process and through the maze up to the front door. The minute I stepped in, the smell of cotton candy, popcorn, and elephant, transported me back in time.

Two sodas, one bag of popcorn, a snow cone, and cotton candy in hand we headed for the seats. But wait, there were really cool lazar swords and butterflies we couldn’t pass up. Juggling our goods we finally settled in. Wow, three rings, clowns, elephant and pony rides had all three of us staring with our mouths open.

“Sue Sue, can we get our faces painted too?” Jackson asked, bringing me back.

“Let me see,” I said as I dug through my wallet.

“Oh Buddy, I don’t have enough money left and these guys won’t take my debit card. They want cash,” I said in disbelief realizing I only had a five dollar bill left from the $80.00 I had punched out at the ATM.

“That’s OK. We can do that next year,” he smiled as he bit into the cotton candy.

While I was silently trying to figure out how I had just spent $75.00, the lights lowered and the crowd cheered. The Ringmaster stepped into the spotlight in the traditional too-tight pants and tailed jacket, “Laaadiees and geeentelllmen, boooys and girrrls ….” Are you kidding me? It’s as if those words hit a button in my memory and here came the tears. I instantly needed my Dad.

Suddenly I realized Mollie Jane was watching me. Come on Suzette, get it together! “What’s wrong Sue Sue,” she asked?

Two hours later we slowly walked out with the crowd discussing if the lions were really mad or just pretending, how scary it was to watch the guy on the high-flying wheel and the reason our feet were sticking to the floor.

When I tore the coupon out of that Sunday paper I never planned on what I was really going to experience.