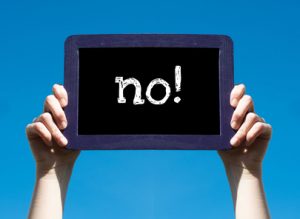 “No.” “Nope.” “Never.” “Not going to happen.” These are powerful and discouraging words depending on if you’re saying them or hearing them. Every day we have to say “No” to employees, kids, contractors, clients, and the Girl Scouts and their cookies. We’re also on the receiving end of “No” and we don’t like it. It can be frustrating and sometime even embarrassing depending on how “No” is dealt with.

Our first and natural response when told just plain “No” without explanation or clarification is to immediately become defensive. Knowing how that feels should be great instruction on how to say “No” without knocking the wind out of the one you have to decline.

Here are some reminders for when you have to say “No”:

If you do have to say “No” put yourself in the shoes of the person hearing it. Always remember to say it in the kindest, easiest-to-receive way because that’s how you’d like to hear it yourself.