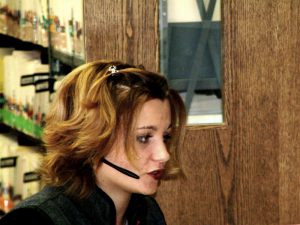 My argument composed perfectly, I dialed the Whirlpool customer service number. Joni Thalheimer and I were teammates in the mostly male high school debate tournament world and we could take out the best of them. So I was confident I could handle any push back from a guy who didn’t want to cover my six-month-old faulty water heater.

After hitting four extension numbers and saying rep-pre-sen-ta-tive three times, my strategy had to change. A woman answered the phone.

Mrs. Metcalf, our debate coach, told us to be ready for anything, can your plans if necessary, and take a different approach. I had to do just that because, for me, it’s easier to debate with men. Jim Brawner will tell you so.

I started off with the necessary pleasantries then explained my problem. “The plumber said the thermostat was not working and Lowe’s said to call you. I need a new one,” I explained.

“I will give you an authorization number to take to Ferguson’s to pick up a new thermostat. You can get it right now,” she said.

I told her I had never heard of Ferguson’s and there wasn’t one our small town. “Oh yes there is! I live in a small town and we have one. Yours is at 500 West Main Street. Take this number and they will give you one,” she said firmly.

“I promise there’s not a Ferguson’s here.” I said laughing.

“Look,” she said, “I know plumbing and you have to go to your Fergusons.” I told that she may know plumbing but I know Branson and there’s not a Ferguson’s in Branson, Missouri.

Joni and I debated whether or not to establish a military draft during the Viet Nam War and we had to represent both sides at tournaments. Surely I could convince this lady in a small town somewhere that we positively don’t have that store. So, I quickly Googled.

The Whirlpool lady then said, “I can see you are upset. I would be too if I didn’t have hot water. Please take this authorization number and go to your Ferguson’s store to get the thermostat.” Clearly she was reading from a script at this point.

What she was hearing was my debate voice, not my upset voice. She really didn’t want to hear that. No one does.

“Ma’am,” I said in my best debate voice, “I Googled Ferguson’s in Branson, Missouri and, yes, you are right, there is one at 500 West Main Street.” I could just picture her smiling. “However, it is not a plumbing supply warehouse, it is an immigration law firm.”

I received a thermostat via UPS the next morning. Who says you don’t use what you learn in high school in the real world?