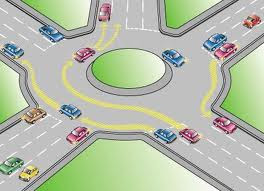 Traffic tops the list of things I really don’t like. That green plastic Easter grass now available in assorted pastels, roaches, mice, and losing Jim Brawner in Walmart finish out the top five.  Cell phones have lowered the losing Jim Brawner in Walmart to #5.  The only reason it’s still on the list is he sometimes doesn’t answer, which makes it even more frustrating.

Close to creeping onto The List is roundabouts.  We now have three in our town.  Maybe it’s not the roundabout itself that irritates me, but the out-of-towners who have never driven on one. I will admit when the first round intersection opened a few years ago I was concerned I might get stuck in the middle lane circling like Chevy Chase in European Vacation.  It took a few times to figure it out

There are a couple of roundabout rules that obviously need to be followed. The entering traffic must yield to the traffic already in the circle and the flow runs counter clockwise. If you live in a country that drives on the right side of the road, the flow runs clockwise. To avoid disaster, you have to play by the rules.

Last week I approached the largest roundabout in town with my guard down to lost tourists since it was late at night. To my amazement a woman rolled up to the intersection on my right, looked both ways and turned left driving right past me to the next exit point.  Really?  Well, maybe she was from London.  Probably not.

I thought about the lost woman as I drove home and realized we had something in common.  The past month or so has been a bit off kilter and out of sync. Everything normally easy has been challenging, routine has not been routine, and change has sprung up everywhere. I feel like I’ve been driving the wrong way on a roundabout.

Like wearing a wool sweater without an undershirt, it’s been aggravating.  But after considering everything, I realized I can’t change or control anything but my attitude.  That bit.

I suppose we all get off track every now and again and again and again, like turning left on the roundabout.  It’s good to remember to get back in the flow of traffic it only takes few minor adjustments that normally begin with attitude.