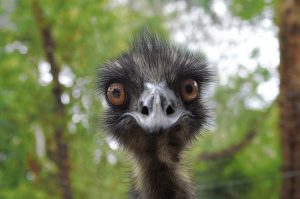 The salon was beautiful and highly recommended. The rates confirmed it should be the best in New York City. I sat down, took a deep breath, and relaxed. I had been away from home for several weeks so I rationalized what I was about to spend. I even felt a little bit important as the hairdresser flipped the cape and draped it over me. Then I simply asked, “How are things going?”

I spent the next hour and a half listening to everything that had gone terribly wrong. Her husband admitted to an affair, her son had gotten in trouble at school and the electricity was shut off in her apartment. She found the bill she thought she had mailed two weeks earlier between the seats of her car that morning.

I should have known better, but I sat there. She talked, I listened, and she cut and snipped and cut. I wasn’t facing the mirror so I had no idea what was going on. When she finally finished and turned me around my hair looked like something between a Rod Stewart spike and Demi Moore bald. I was stunned. She said, “Oh I guess I was so into talking I cut a little more than I intended. The good news is hair grows really fast.”

I have never gotten my hair cut facing anything but the mirror since then. The only good thing about that trip to the salon was for about eight weeks my hair only took three minutes to dry. I felt almost naked the first week and then decided to act like I had it cut that way on purpose because unlike some things, it couldn’t be fixed by anything but time.

Time moves so slowly when we want things to happen quickly. Whether it’s the last few weeks of pregnancy, potty training, healing from an illness, recovering from a loss, or growing hair, the days seem to creep by. And we wonder why. I read once we live life forward and understand it backwards. Looking back on things that seemed to take forever make a little more sense now.

Here’s what I’ve decided … we’ll never figure some things out this side of heaven and no one is obsessed with your own hair like you are. So do the best you can with it, smile, and enjoy the day. Your hair looks better than you think it does.