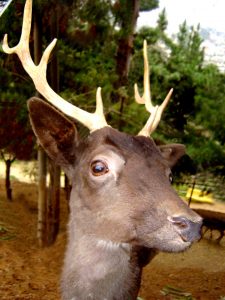 After a delayed-three-times flight finally landed at the Northwest Arkansas airport, we still faced the hour and a half drive through the back roads to home. We grabbed our bags and two large coffees and 20 minutes later located the car we had parked three days earlier. That trip is why I now take a picture of those letters and numbers in parking lots.

Forty-five minutes down the road I wished I hadn’t ordered the large coffee. I kept driving because we were in the middle of nowhere. “Mom,” Jill sighed, “I wish we hadn’t gotten coffee.” I had one of those potty training flashbacks when your child insists they have to go now. “Mom! Are you asleep?’

“No, I’m trying to figure out what to do. There’s nothing but woods for miles!”

“Oh wait look, there is a gas station … of sorts,” she said. There was our beacon of hope; a sign with two of the three bulbs burned out: Uncle Roy’s. Open Late.

“It’s either Uncle Roy’s or the woods. You choose,” she insisted. I pulled in the gravel driveway against all better judgment at 11:30 p.m.

We smiled at the man sitting behind the counter as we searched for the bathroom. He signaled with his head which way to go. The only difference in Uncle Roy’s bathroom and the woods was running water.

We met back at the counter with candy bars. I don’t know why I feel it’s necessary to buy something when I use gas station facilities. The man, who I suppose was Uncle Roy, looked up from his newspaper and grinned through a swirl of cigarette smoke, “You girls ain’t from around here are you?”

I simultaneously felt proud Uncle Roy thought I was a girl and scared because this was like a scene from a bad movie.

“We’re actually pretty close to home. Our husbands are expecting us any time,” Jill said with her New York City street smarts.

Uncle Roy continued, “I have one thing to warn you about.” At this point I started to sweat. “Y’all watch out for them deer. Them’s kamikaze deer. A lot of folks have ruined their rigs ‘cause of them deer.”

We told him how much we appreciated the warning as we walked out the door. I tried not to run. Sure enough, five minutes later we laughed as I swerved to miss a kamikaze deer.

I thought about that late night trip recently when I had a day with all kinds of kamikaze stuff flying out in front of me. The difference in kamikaze deer and kamikaze stuff is that deer will ruin you car and stuff with ruin your mood and attitude. At least with stuff you have a minute to take a deep breath before you react, with deer not so much. Thank you, Uncle Roy.