“Why did I think this was OK?” Some ideas that sound perfect in the beginning can turn into head scratchers asking you that question. One such incredible thought was breeding our Labrador 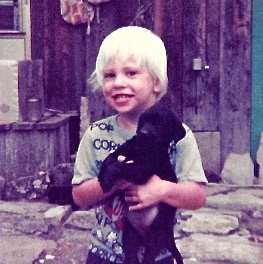 Retriever so the kids could experience birth and learn how to be caregivers. What that means in layman’s terms is Mom learns how to take care of one more, in this case 11 more, living things.

The vet bills were a tad more than expected so when the pups were 6 weeks old we put an ad in the local paper. What started out as a lesson in puppy care also exposed our kids to sales, finance, marketing, and negotiation strategies.

About 8:30 one night, a man who lived 30 minutes away called interested in seeing the puppies. An hour later he pulled into the driveway, the truck sputtered to a stop and he reached out the door to release the bungee cord holding it closed. I mentally rolled my eyes. What were we thinking?

He introduced his wife who was already holding two puppies. Within in three minutes he pulled out of his tattered jeans’ pocket a wad of money in a huge rubber band like the ones that hold broccoli together at the grocery store. I tried not to gasp. He grinned. “I guess were gonna have to take two of ‘em. Momma can’t decide on just one,” he said as he handed me large bills. Unbelievable!

The greatest lesson in this whole experience was not for the kids, but me. First appearances of the puppy customer shouted broke and unemployed. I will have to admit as he handed me the cash, I briefly wondered if I was doing business with one of the Arkansas drug lords.

You sometimes, always, never, know people’s stories, their backgrounds, the paths they walk, or where they are headed.

I read an article recently about Sophia Amoruso. Twelve years ago she was dumpster diving for food. Today with her online vintage clothing store she is worth $280 million. I wonder how many people marked her off as someone who would never amount to anything.

I want to make it a full time practice of seeing past the outer shell and looking straight into the heart. I’m strong like that for a few hours, and then I leave the house. Mother Teresa once said, “If you are busy judging people, you have no time to love them.” Oh if we could just think the best and always see a positive future for everyone … because you sometimes, always, never know.